Kazakhstan's auto industry maintains positive dynamics: against the backdrop of global problems and a slowdown in world leaders, production in Kazakhstan increased by 25% over the year | AKAB
AKAB > News

Meanwhile, in China output growth was only 5%, in South Korea - less than 2%, while Japanese and British automakers are in the red.

The automotive industry as a whole is going through hard times: the protracted pandemic and subsequent lockdowns, the acute shortage of semiconductors and the general destruction of global supply chains have affected. Then the problems were added by the geopolitical crisis associated with the war in Ukraine, which finished off the supply chains of components and raw materials, including those necessary for the automotive industry.

Nevertheless, the crisis did not affect the auto industry of Kazakhstan so much: for example, in January-August of this year, 68,6 thousand cars were produced in the country, which is immediately 24,7% more compared to the same period last year.

Note: according to analysts Automotive Industry Portal MarkLines, in comparison with many car-producing countries, Kazakhstan occupies the strongest position in terms of growth in car production in the world. Also, a significant increase in production was noted in such ASEAN countries as Malaysia and Indonesia - by 70,3% and 31,5%, respectively. In China, the world's leading car manufacturer, production grew by only 4,9% over the same period, while in the US it grew by 7,4%. Moreover, if in Germany the production of cars grew, albeit only by 3,4%, and in South Korea - only by 1,7%, then in countries such as the UK and Japan, production decreased noticeably - by 9% and 9,7%. .XNUMX% respectively. At the same time, for example, residents of the already mentioned South Korea warnedthat the waiting time for buyers of Hyundai, Kia and Genesis can take up to 2,5 years (a year earlier, the same cars were delivered to customers about 11 months after purchase). In addition, in neighboring Russia, car production volumes fell immediately by 58,9%, to 431,8 thousand cars in January-August 2022. 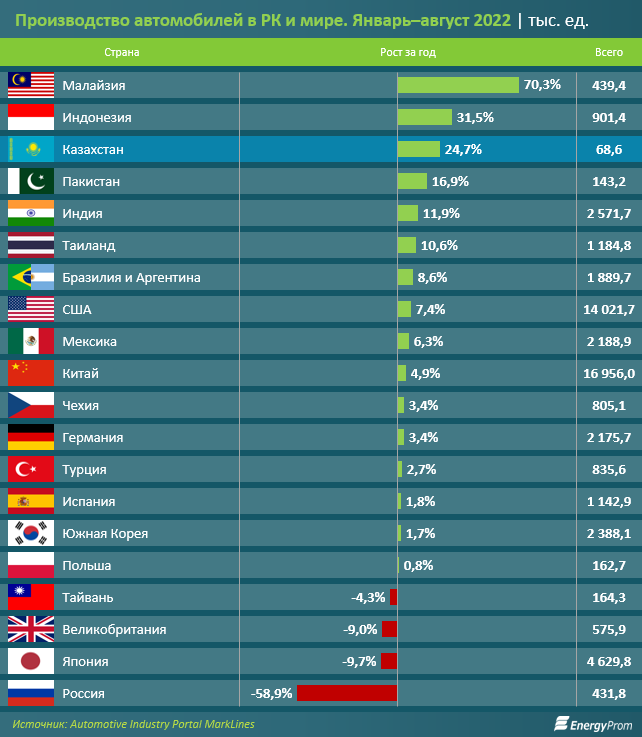 Only in August 2022, 9 thousand cars were produced in the Republic of Kazakhstan, which is 14,8% more than in August last year.

At the same time, the average monthly production growth in the current year amounted to 25,3%. The smallest growth was noted in February - only by 4,6%, and the highest in May - immediately by 60,6% compared to the same month a year earlier.\

The largest number of cars was produced in June (11,2 thousand), followed by May (9,9 thousand) and the already mentioned August.

In the total number of cars produced in January-August of the current year, 62,5 thousand were passenger cars, which is immediately 31,6% more compared to the same period in 2021. Another 4,8 thousand pieces of equipment accounted for trucks. Also, 712 buses, 396 trailers and semi-trailers and 182 units of other specialized equipment were produced. 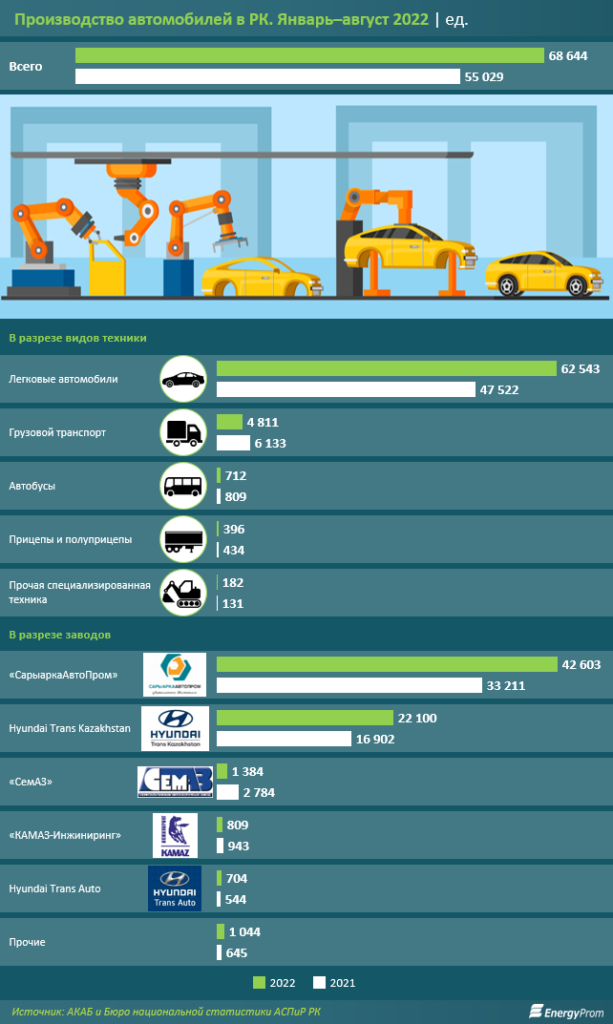 In the context of factories, the largest production volume fell on the Kostanay "SaryarkaAvtoProm": 42,6 thousand units of equipment. Here, production increased by 28,3% over the year.

Almaty's Hyundai Trans Kazakhstan is next: 22,1 thousand units, an increase over the year by 30,8%. A significant number of vehicles were also produced at the SemAZ (1,4 thousand units), KAMAZ-Engineering (809 units) and Hyundai Trans Auto (704 units) plants, energyprom.kz reports.

The Kazakhstani auto industry maintains positive dynamics: against the backdrop of global problems and a slowdown in world leaders, production in Kazakhstan increased by 25% over the year

The Chevrolet Cobalt car was presented in the capital at the exhibition "The Best Product of Kazakhstan".